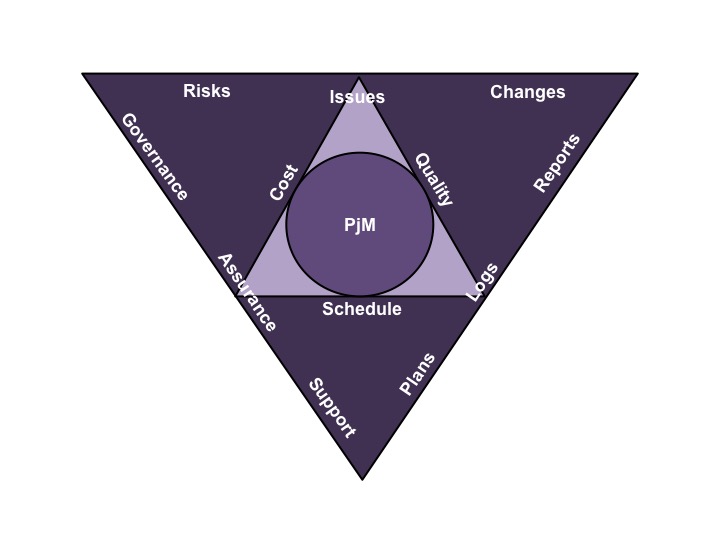 THE NEED FOR SIMPLICITY.

In a competitive world where things are changing at an ever-accelerating rate, being able to reliably deliver projects at optimum time, cost and quality is becoming increasingly essential.

Standard methodologies such as PRINCE2®, BS 6079, ISO 21500 and the PMBOK® provide excellent project management theory, but organisations generally struggle to put the disciplines described by them into practice in a way that genuinely improves profitability.

In this post I’ll discuss what is required to enable an organisation to define how it should manage its projects, based on the disciplines found in standard methodologies, which will enable improved project delivery and, in turn, improve profitability. It is based on my experiences as a successful project manager, PMO manager and project, programme and portfolio management (P3M) consultant. It includes detailed but simple guidance on how to apply the project management principles described in project management methodologies to your organisation.

So there might be little incentive for an organisation to improve its project management, unless it has a result on profitability, which of course, usually, it does – significantly. It’s surprising how many organisations accept that it would be good to be better at managing projects, yet don’t attempt to estimate what might be gained. In simple terms, improved project management capabilities will achieve one thing: improved project delivery. This means being more reliable and efficient at optimising projects in terms of time, cost and quality.

Does the following scenario sound familiar to you? 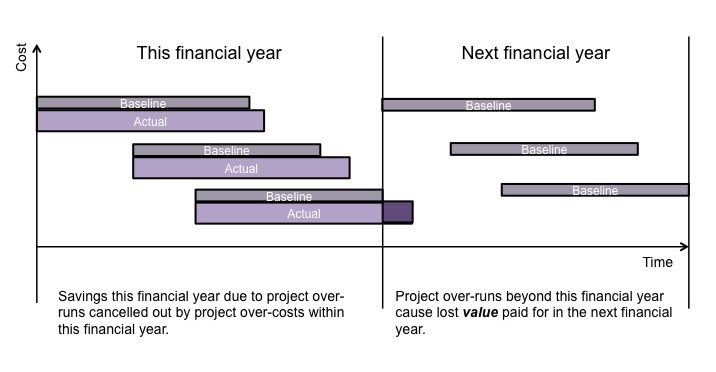 These can, in fact, largely cancel each other out, fooling an organisation into believing it has done a good job of controlling its spend within budget. In reality, it has failed to gain the expected value, or benefits, from its investments.

It is surprising how organisations so easily accept this, and then simply include funding for completing delayed projects within the following annual budget. The magnitude of the lost value can be very significant and provide ample incentive to improve project delivery! To illustrate what I have described, let’s take the following simple fictional scenario:

An organisation plans to spend a million pounds on change initiatives in a given financial year. Due to poor project delivery, 10% of the project costs (equivalent to £100,000) are delayed into next year, cancelled out by the projects over-spending by 10%. Total costs within the current financial year are, therefore, in line with budget, hence there are no ‘budget’ issues, but there is now a need to use £100,000 of the following financial year’s budget to complete what should have already been completed! And, significantly, the benefits of the uncompleted projects will be delayed until the following financial year as well, of course.

To further illustrate this point, many readers will have been involved in a common situation towards the end of a financial year when the total savings due to project delays are greater than the project over-spends, causing frantic activity to spend the remaining budget on anything that can easily be achieved, almost regardless of its value and necessity, in order to protect the budget for the next round of negotiations.

Impact on quality and time to market

There can, of course, be even more drastic consequences of poor project delivery if it is contractual, where failing to deliver on time and to acceptable quality can, in the worst case, be crippling to a business.

Given what I have described above, it is easy to put together a simple

Business Case to justify an improvement initiative based on reducing lost value, realising expected benefits, efficiency savings and protecting the company from failing to deliver against contracts.

A common theme, true to many organisations, is that project management is recognised as a discipline, but it is unclear about what project management really is, although very clear that it isn’t working well. In some cases, employees have been on project management courses and are then expected to apply what they have learnt. In other cases, organisations have had various attempts at defining how they should manage their projects, but have not managed to successfully adopt anything and are left with materials, that they invested significant time producing, being buried deep in corporate filing systems.

An important consideration when designing a corporate project management framework is the project management maturity of the organisation. To become world class can take a number of years to achieve, but is absolutely possible and very worthwhile. Whatever the current maturity level, and as maturity improves, the most benefit for effort (and therefore cost) will be achieved and maintained by keeping things simple. Far too often, I have encountered organisations attempting to apply far more project management discipline than they can afford and failing to do so, whereas significantly better project delivery would be achieved by concentrating on a few key controls that require far less effort.

I am a strong believer in the adage that if you can’t explain something simply enough, then you don’t understand it well enough. It took me quite some time, early on, to ‘separate the wheat from the chaff’ in order to appreciate how simple, elegant and beneficial project management can be.

What is project management?

If we can define both a project and management, then the combination of the two will define project management.

The best definition of a project that I have encountered is as follows:

‘A unique set of co-ordinated activities, with definite starting and finishing points, undertaken by an individual or organisation to meet specific objectives within defined schedule, cost and performance parameters’.

I have highlighted in bold the key words within this definition. Note that ‘schedule, cost and performance parameters’ are sometimes referred to as timing, cost and quality (or scope).

A good definition of management is ‘the achievement of objectives through others’.

A project management methodology is a defined approach to delivering projects. Well known examples are PRINCE2®, BS 6079, ISO 21500 and the PMBOK®. These (and others) are broadly very similar, with some differences in terminology, but they are hefty volumes that cannot be directly adopted by any organisation.

Instead, the content of such methodologies needs to be considered and then a tailored version defined and adopted, appropriate to the particular organisation, based on the size and complexity of their projects and the current level of project management maturity. This is a vital step towards an organisation achieving reliable project delivery.

Once a defined way of working is in place as a set of processes, it becomes possible to govern and support projects and put in place software tools that enable their efficient application. The processes, tools and a set of standard templates can be considered to be the organisation’s project management ‘framework’: 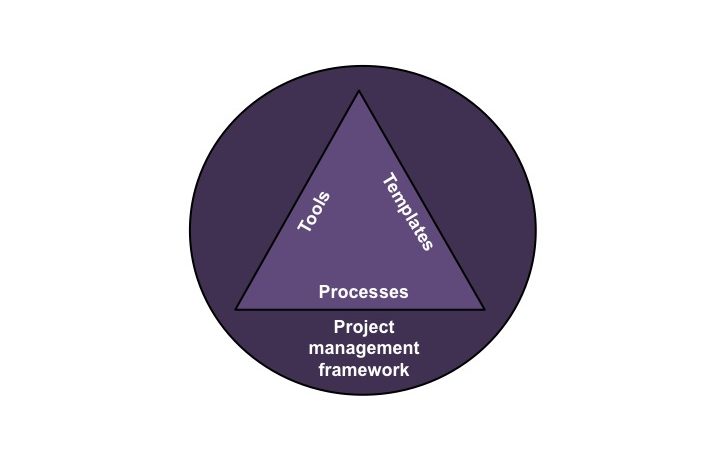 A mistake many organisations make is to implement an expensive software tool without having appropriately defined the intended way of working, such that it is poorly configured, leading to frustratingly poor adoption and a lack of return on investment.